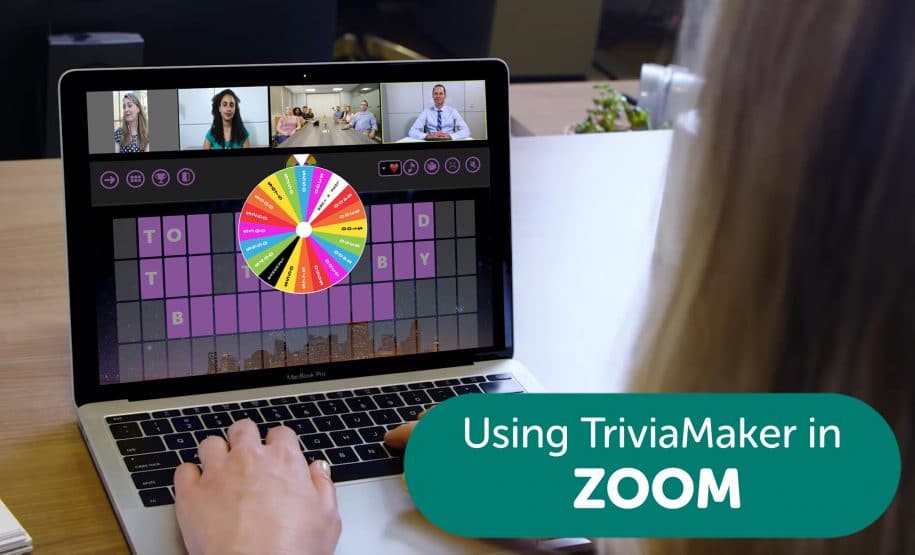 Make your cloud staff meeting or virtual party a little more fun by hosting a virtual trivia game. With TriviaMaker, you can create games with formats similar to popular tv shows like Jeopardy, Family Feud, Wheel of Fortune, and Multiple Choice. All you have to do is create a game at TriviaMaker.com, then share your screen in your chat and host the game like a pro!

Check out the full TUTORIAL VIDEO at the very bottom of the page.

You just need to make sure that you can “share your screen” with the group. It’s even better if you can also share you computer sound with them (easily done in Zoom).

Keep in mind, these are just some ideas to get you started. Let your judgement and individual situation be your guide.

How to split up teams and take responses:

Although TriviaMaker does allow for up to 50 teams / participants, we recommend splitting large groups in to 4 teams, to make things a bit simpler to manage on the scoreboard side of things. I would think of ways that your group could be split into 4 teams (or less). For instance, Men vs Women, Sales vs Techs, etc.

OR you could split them alphabetical by last name: Team 1 is last name A-F, team 2 is G-M, team 3 is N-S, team 4 is T-Z. Then you can use one of these options to let that team answer.

With this option, you would give each team a chance to answer 1 question at a time. Team 1 does question 1, and then it’s the next team’s turn on the next question, and so on. You could either select one person from the team randomly, let people “raise their hands” in Zoom, or just have each person on each team numbered and go down the list.

Another idea is to use Zoom’s POLLS feature. You would ask a question, and then have the team who’s turn it is answer the Zoom poll. Whichever answer most of them choose, is that team’s answer. It would require a little more work (entering your questions / answers in the Zoom polls page ahead of time) but could be really fun.

This one is like option 1, but instead of just asking a random person from the team, you could send groups in to  breakout rooms to talk it over with their team, settle on an answer, and then bring them back. It would be a good idea to give each team a spokesperson or team captain.

If you have a large group and have a lot of time, you could also use breakout rooms and have a separate game going on in each room. However, each room would need a host who could log in to TriviaMaker and share the game. You could maybe then take the winners from each breakout room game and have them play for the championship in the main meeting.

Lastly, you could simply have them use the chat. With this, you could play several ways.

With this idea, whoever puts the right answer in the chat first wins. This could be really fun with the “Wheel” style games. As the host reveals letters, the first to solve it wins.

If your group is between 10-50 people, this could work well. You would say “Ok team 2, this is for you. Everyone on team 2 type in what you think the answer is. If you’re not on team 2, don’t type anything in.”

Then you would look at the 10 or so answers that come in and let the majority answer be that teams answer.